Master performances. “Wyjeżdżamy” (“We are leaving”) for the beginning

Main Page / Bez kategorii / Master performances. “Wyjeżdżamy” (“We are leaving”) for the beginning 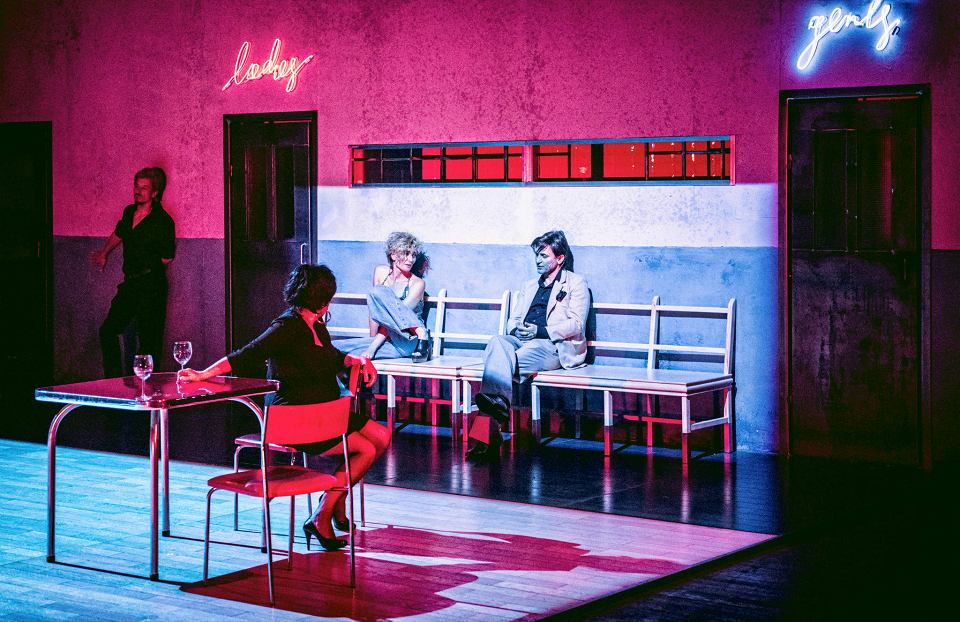 We will open the festival INTERPRETATIONS officially with the master performance “Wyjeżdżamy” (“We are leaving”) from Nowy Teatr in Warsaw. The show is directed by Krzysztof Warlikowski.

13 years after the premiere of “Krum,” Krzysztof Warlikowski is coming back to Hanoch Levin’s oeuvre. Krum comes back to his homeland following unsuccessful exile abroad, full of hope for accomplishment. Now, these days, everyone wants to leave somewhere.

The great human migration in Levin’s piece finds its local face and scale, reflecting all of the concerns and moves in the macro scale. A rebellion is in store – a rebellion of maturity against the appropriation of the territory of freedom and our life being pulled into the mechanisms of peace at the cost of submission.

In the “Comedy with eight funerals,” the journey usually leads to the other world. Despite the one-way ticket, the willingness to leave does not subside. However, is it really that life is somewhere else? Is it not better and wiser to commit to building a community? Is it the time of Romantic gestures or Positivistic work for the common prosperity?

“We are leaving” features a twisted and exhausted micro-community with a history that is hard to fathom. The weirdness of this community is that it exists in spite of everything. The more funerals, occurring at an increasing pace, the faster it should exhaust itself. Nevertheless, everyone is drawn towards another human being. No matter what. Warlikowski’s intriguing idea is the screen over the stage showing private pictures of actors from their youth. The pictures are displayed when related characters die and funeral speeches are read to commemorate them. This is also a kind of joint reflection by the actors so closely connected with their director, bringing the question of death onto the private level. To some extent, they are made equal to each other in their sense of being a team. Everyone has a role to play and an opportunity for a star performance – however, something else is of greater importance here. It can also be seen in the ironic final part delivered by the group of actors.

Everything seems obvious when in one of the final scenes, in which Mrs. Dani Gelernter (fantastic rendition by Jacek Poniedziałek) meets the deceased parents and utters the very important statement: “Everybody who has stood between me and the death, have died. Nothing separates me from it anymore.” Krum had returned and then left nowhere. He just watched others leave and was probably well aware that this was pointless. This Krum has ample experience, but Jacek Poniedziałek wears a baseball cap like a teenager who is impressed to watch his older friends make important decisions. Does this story about life and death have a proper beginning and an end? Maybe it is just that there are no departures and returns in the first place? Maybe it is just that the only place where we exist in is ourselves and the couple of people around us? And this is the only thing that matters.

The commentary for “We are leaving” says that, in adapting the original piece, the director also used passages of other Levin’s plays and incorporated passages of “Nigdy już tu nie powrócę” by Tadeusz Kantor, “Rzeczy, których nie wyrzuciłem” by Marcin Wicha and “Życie osobiste” by Henryk Grynberg. However, in the 3.5-hour show, Poland just resounds in the distant background, only – in the climate, moods and, at times, in allusions. Bella Szuster (Magdalena Popławska) plans a trip to London. She has no illusions that her life will be better there; after all, nobody is waiting for a girl coming from the other end of the world there, but – as she explains, and the audience bursts into laughter – at least television will be better. The American traveller Angela Hopkins (Magdalena Cielecka), travelling “the middle of the Middle East,” as she informs the fans of her vlog – can be eventually seen in a video riding a taxi down the streets of the former ghetto and right to the Chopin Airport. Following his brother’s death, Motke Czkori (Marek Kalita) delivers a funeral speech and transforms from a womanizer and a bodger into the head of the family and a self-proclaimed community leader.

Similarly as previous shows from Warlikowski, “We are leaving” is an international coproduction and needed to be intelligible to the audiences in France, Switzerland and at the Greek Festival in Athens. This is why universal themes prevail. The absurdity of human existence, marked by the great effort, disappointments, attempts at escaping one’s roots, the quest for happiness and fulfilment away from the family home, as well as dreams and the lack of the sense of accomplishment. And in the end comes death – probably the only chance for the real “departure,” one more irony of fate that Levin’s protagonists sense very well (…).

The action is scarce, the rhythm sleepy, and the dramatic motor is hardly there – just as in life. The funerals make the refrain that comes between verses of family arguments and reconciliations, and the attempts to leave and returns. In the first scene, Szabtaj Szuster (Zygmunt Malanowicz) dies during a failed defecation, others – “while having a soup,” making love (Alberto Pinkus, the local womanizer – Andrzej Chyra) or of brain tumour at the age of 28, leaving wives, children and mothers behind.

Displayed on the large screen, the obituaries are accompanied by actors’ private photos. At the end, everyone is dancing together to some mellow music. In this attempt to domesticate death, some viewers have noticed an allusion to Alan Ball’s outstanding series “Six Feet Under.” Others claim that Warlikowski stirs a reflection similar to the mother of Danny (Jacek Poniedziałek), Henia (Ewa Dałkowska), who keeps telling him that she is going to die soon, and he will realize what a treasure she was only after her death. Let’s enjoy the community we, the artists and audiences, make as we do not know how long it will last.

Everyone is standing in one colourful row, with their backs facing the audience. In one row and together – those who have for 3,5 hours played people involved in disputes, arguments, sometimes fighting with each other on the tit-for-tat basis, on the word-for-word basis. Do they leave? Not at all. They are here, both the dead and the living. They return. They go towards us, towards the audience. They subvert the rules of the game. They ridicule us. They are beautiful. Some 20 of them. They are young or not quite young anymore, men and women. Our brethren. They are arrogant and sarcastic, and armed with strawberry-coloured lollipops. They are modest and provocative, joyful and in despair.

The final chorus line is applauded by the enthusiastic and excited audience, as if mirroring the actors. They are us, after all – we have recognized ourselves in them. They have told us: “we are leaving” rather than “we are disappearing” or “vanishing.” They carefully arrived at the conclusion that it is better to leave. Without crying or agitation. “He has passed away,” they say about those who died – this is the hypocrisy operating deep within the society that Krzysztof Warlikowski’s extraordinary show rests on. He had not left. He has returned. He has returned to one of the most interesting inspirations – the oeuvre of the Israeli writer, who keeps teaching and moving us nearly 20 years after his premature death at the age of 55. Hanoch Levin. His profound awareness and ridicule do not cease to amaze us. It is impossible to forget “Krum.” Ectoplasmic “Krum,” as the writer would say. This was one of the best performances by young Warlikowski and his young actors. Krum left for the world outside to make fortune and had just dirty cloths in his suitcase as he went back to his mother.

A suitcase or a coffin? The original title of Hanoch Levin’s play is “Suitcase Packers.” It was written in 1983 with a subtitle “A Comedy with Eight Funerals.” They have come. Their backs are facing us, too. They stand in a place separated from the floor of the ball room, the main stage of sorts, behind a low glass pane. Difference and repetition.

A suitcase at hand is a suitcase of a man endangered, who is being chased. The suitcase of Jewish families at the time of war. All witnesses have spoken of those suitcases. On the wardrobe. In hands […].

Warlikowski speaks of his own country, here and now. He speaks of the ruling party, which constantly fights the most original artists. It fights the structures. On the stage of the well-known theatre Domaine d’O, during the French premiere of this amazing play, Polish actors do not limit themselves to their characters. They are themselves. Their real selves. They are threatened by the dead silence. One could speak endlessly about the outstanding and unbelievably funny play – you can hear laugher again and again; it is equally funny and frightening. Paralyzing. Israel in 1970-90; Jews in Europe during the last war; Israel consumed by its morbid aspirations; and France trusting the algorithms: is it not our world?