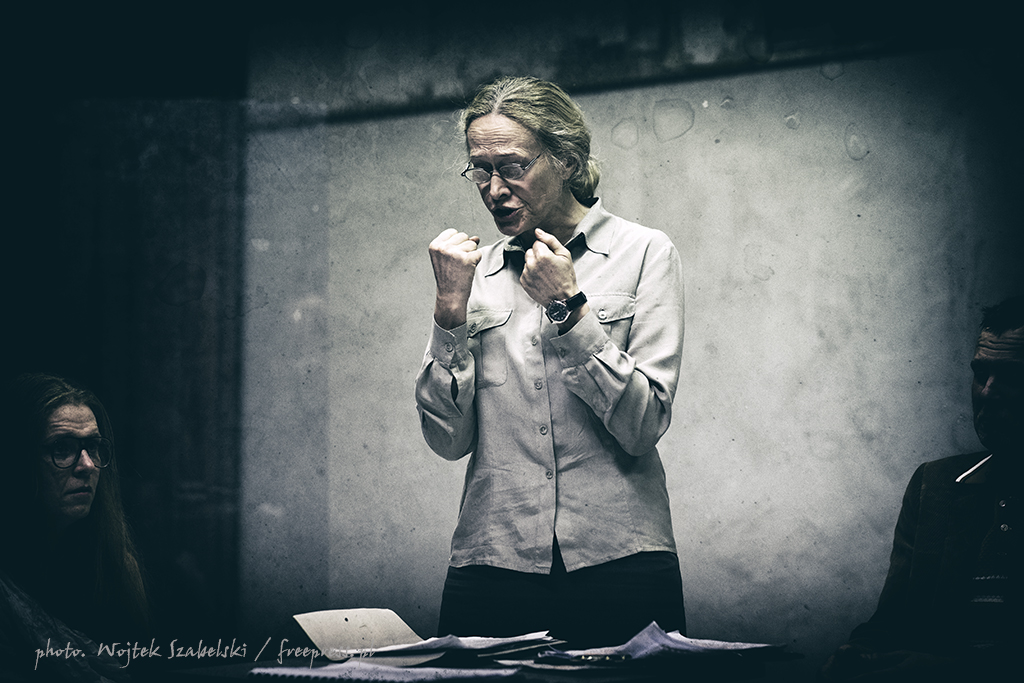 Year 1974. In Iceland, two men mysteriously go missing. Their bodies have never been discovered. During a highly controversial, circumstantial investigation, six young individuals pleaded guilty of the murders and then repeatedly withdraw their statements. Following a sensational trial, the court passes severe sentences, including the first sentence of life imprisonment ever imposed in Iceland.

Through the in-depth research and own investigation, the artists behind the show explore the issues related to human mind and memory, in which fiction and imagination blend with reality.

“The starting point in my work are always the fact-related materials, full of contradictions and mutually exclusive arguments. During the rehearsal with the playwright Marta Sokołowska and the actors, we turn into members of an experimental research group and conduct a sort of investigation. Then, within the performance itself, in front of the audience, we seek to reconstruct those events based on collected evidence, and to reconstruct the characters,” says the director about her show.

“Katarzyna Kalwat’s play recounts a story of a mysterious murder of two men, whose bodies have never been found; however, during a circumstantial investigation, the court sentenced six young people. The play focuses on two of them: Svar and Erla, subjected to violent interrogation, mental and physical torture and various kinds of pressure to secure desired statements. This is a brutal vision of interrogator’s manipulations, dominance and control over the prisoner, reduced to a caricatural framework due to the pseudo lawsuit, during which the prosecutor and the defence counsel interpreted the same short videos in starkly different ways. The Toruń troupe created a heavy, dense and unbearable atmosphere of intrusive and monotonous interrogation, which provokes questions rather than providing answers. Paradoxically, through the persistent, static repetition of subsequent interrogation mechanisms, the audience receives a poignant story about manipulation and terror, and this story is fascinating in its ambiguity.

“Katarzyna Kalwat uses various interweaving staging means, which, once touched and named, immediately elude us. This ragged openness of the show, merging into unity, is its great advantage. The same is true for the entire investigation conducted by the Toruń actors. Kalwat errs along with them, poses questions, makes allegations, arguments, assumptions, and this does not afford any clarity when it comes to assessing different versions of events. This approach to the subject, with different points of view being successively discussed, absorbs and excites the audience, and exudes a special aura and keeps the audience on its toes, as the finest thriller would do. This is also thanks to the outstanding actors, a kind of representatives of memory and event creators, especially Barosz Woźny and Jolana Teska. It is thanks to them and Tomasz Mycan, Paweł Tchórzelski and Matylda Podfilipska, balancing at the border of created characters and privacy, a permanent feature of Kalwat’s performances, that we can take part in and witness an unusual lawsuit aimed at reconstructing the past events, and in doing so puts forth increasingly debatable arguments, at times vague, more or less convincing or just totally incredible.

“Lies are always more interesting than truth,” said Federico Fellini without knowing it also applies to criminal cases. Over 40 years ago, two men had gone missing in the capital of Iceland. The court sentenced six people, who – as it turned out many years later, were likely innocent. The director and the author show how anybody can plead guilty to the charges. One merely needs to repeat detailed questions long enough. This reflects many psychological studies claiming that one can ‘remember’ the events that have never happened. The actors have delivered their difficult task very well – not only have they played the role of an actual investigative team committed to seeking truth many years later, but also, for the sake of this investigation, assumed the roles of the accused and investigators behind the investigation of 1974.”