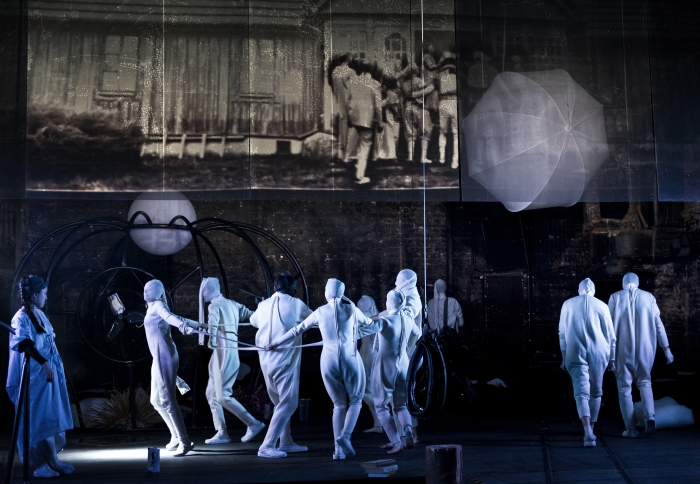 From the monumental novel by Władysław Reymont, Krzysztof Garbaczewski picks out ecological and emancipatory themes; he tracks human links with the natural world and defines the need to work and the sense of work in his own way. Within the multi-layered drama, he juxtaposes the writer’s and modern ideas and creates the world of creatures who are partly humans, animals and robots and look for the meaning of their lives. Represented by Garbaczewski, the world of “Chłopi” is also the stage of performative action, where dramas of the community life based on violence against women and exclusion unfold.

Recognized with Nobel Prize in 1924, the novel depicts the life of a fictional village Lipce in the late 19th century. Usually read as an ethnographic record of the past, it reveals its own myth-making capacity and the creative power of language. As argued by the historian Andrzej Leder, the roots of the Polish mentality go back to the feudal relationship between “the one who grabs the whip, and the one who leans under it,” or even go much further – into the depth of the human spirit, whose sense can be found in the submission to the eternal cycle of nature.

“[…] While watching the performance, it is hard to believe in what is happening on the stage. This could be created only in a madman’s mind […]. The audience will certainly indulge in watching the outer space created by Garbaczewski and his outstanding collaborators, each scene of this performance being wacky to the point one either cannot believe their eyes or burst into laughter. Krzysztof Garbaczewski made at the Powszechny Theatre in Warsaw the most humorous performance in his career. We would not feast our eyes on all of those wonders if it was not for the actors. “Chłopi” makes a remarkable demonstration of what the actors of Warsaw’s Powszechny Theatre can do […]. No doubt, the Powszechny Theatre has another hit.”

“’Chłopi’ makes a powerful force. It is a turbo machine, a theatre racket, incapable of slowing down once set in motion […]. This shows in a fascinating way at both visual and audio levels. This is largely due to the efforts of the actors, who have developed their own grammar of theatrical communication, get on very well together and have great fun on stage. This pays off. Hanka played by Julia Wyszyńska has a single brow, bursts bubble-wrap bubbles and inveighs, in her screeching voice, against Antek. This makes the audience burst into primordial laughter. With a pig tattoo on his back, Łaskowski’s Antek is so comical, yet during his meetings with Jagna, he tones himself down to soft emotionality, which he clumsily seeks to put into words. Another outstanding character is Magdalena Koleśnik’s Jagna, girlishly natural without resorting to dallying; nevertheless, she makes the erotic centre of anything that happens on stage. Mellow Boryna, played by Arkadiusz Brykalski, Grzegorz Falkowski playing a priest who regulates the desires and controls the anxieties, and Ewa Skibińska playing Dominikowa. I should actually list all actors since all of them pursue a single goal very well. This is why they win.”

„In staging Władysław Reymont’s “Chłopi,” Krzysztof Garbaczewski, strangely enough, does not reject the blueprint and at times even faithfully follows it. He reveals many new senses and puts the great Young Poland prose within the context of the contemporary social-feminist-ecological discourse […]. In “Chłopi,” it is the team work of the actors of the Powszechny Theatre that comes to the fore. Energetic, ironic and parodistic acting defends director’s crazy vision. From the first scene on […], actors make one interwoven body.”

“One of the two jewels in this theatrical crown is the spectacular combination of apparently conflicting features: the faithfulness to the Young Poland novel and the strong update on the novel’s themes. The other jewel are the actors of the Powszechny Theatre, who give a remarkable show of talent and team work on stage. “Chłopi” makes a strong voice supporting the longevity of the classics […]. Garbaczewski has treated “Chłopi” in a way that makes the story of Jagna (the outstanding Magdalena Koleśnik) and her peculiar quest for happiness as well as freedom extremely topical and poignant. From the voluminous novel, the director distilled the themes that have some powerful contemporary potential without overly manipulating the original senses included in the Reymont’s piece.”