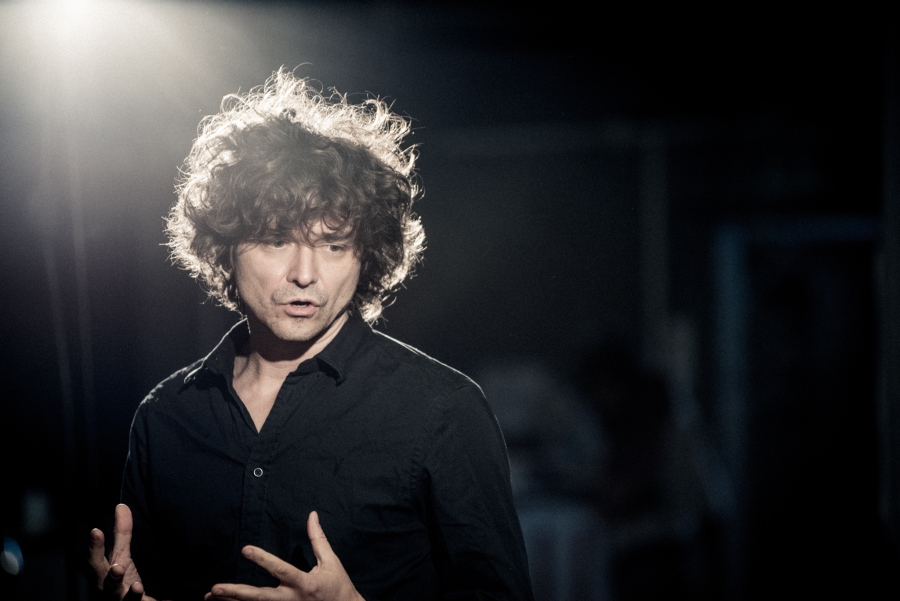 Wojciech Majcherek writes about the director Grzegorz Jarzyna and his performances.

This year, Grzegorz Jarzyna celebrates the 20th anniversary of his tenure as the Director of Teatr Rozmaitości in Warsaw, a position he took the year following his brilliant debut. On 18 January 1997, the graduate of the National Academy of Theatre Arts in Kraków staged Witkacy’s “Bzik tropikalny” on the stage at ul. Marszałkowska.

The same day, Teatr Dramatyczny in Warsaw showed the premiere of “Elektra” directed by Krzysztof Warlikowski. The latter, just as Jarzyna a student of Krystian Lupa, had debuted earlier, yet his show at Dramatyczny was the first play he presented in Warsaw.

Both premieres were considered the breakthrough in contemporary Polish theatre and the two directors emerged as the leaders of a new generation of artists that Piotr Gruszczyński would call “the younger and more gifted,” to distinguish them from “the young and gifted,” the name Jerzy Koenig invented for the directors coming to theatre in the second half of the 1960s, including: Jerzy Grzegorzewski, Maciej Prus, Izabela Cywińska, and Helmut Kajzar. Apart from Warlikowski and Jarzyna, “the younger and more gifted” included Anna Augustynowicz, Piotr Cieplak and Zbigniew Brzoza.

These being well-known facts, it is also worth mentioning them in the context of the Interpretations Festival of the Art of Directing in Katowice. The originator of the event, Jacek Sieradzki, would probably have not come up with the idea of the young directors competition if these directors’ presence in the Polish theatre scene of the time was not that prominent.

Mind you, the first edition of the festival was won by Anna Augustynowicz, and the second one – by Grzegorz Jarzyna with their subsequent much-talked-about shows: “Iwona, księżniczka Burgunda” at the National Stary Theatre in Kraków and the TV play “Historia” based on Gombrowicz.

The lives of “the younger and more gifted” varied enormously. Although definitely not “younger” today, for the past 20 years Jarzyna and Warlikowski have not lost their positions of Poland’s leading theatre directors and their premieres have always been hugely popular.

It would be interesting to compare the paths followed by the two artists. Each has their unique character. Following “Bzik tropikalny,” Jarzyna has never come back to Witkacy’s plays. It seems, however, that the theme of madness (Polish: ‘bzik’), all sorts of mental abnormalities, is a recurrent motif in his dramas. It suffices to mention the poignant plays such as: “4.48 Psychosis” by Kane, “2007: Macbeth” by Shakespeare, “The Second Woman” by Cassavetes, and “Märtyrer” by Mayenburg. Obviously, the director does not address this issue from the perspective of medical experience. Madness, for Jarzyna, is the opportunity to explore the truth about humans and their relationships with the society.

This strand of Jarzyna’s oeuvre also encompasses “G.E.N.,” i.e. his latest premiere, produced at TR Warszawa and also presented at this year’s Interpretations as one of master shows. The show was inspired by Lars von Trier’s film “Idiots” about a group of young people pretending to be mentally retarded. Obviously, that was a provocation aimed at exploring the boundaries of individual freedom in the contemporary social and cultural system. Jarzyna and his actors are interested in that experiment also as a kind of journey into the human psyche in quest for the titular gene responsible for the violence and hatred. For Jarzyna, “G.E.N.” has also been an attempt to build a group of actors making a community bound by their aesthetic and ethical sensitivity. Behind this is the real faith that theatre can still be a place creating new ideas and forms, even if, as in the case of Jarzyna, a lot of inspiration comes from cinematic art.

Both Grzegorz Jarzyna and Krzysztof Warlikowski enjoy the status of the masters of Polish theatre, which probably is not a comfortable position. Both of them are aware that the stage sees a new generation of directors, especially female directors, who might not feel the need to fight with older leaders. At the theatres they head, Jarzyna and Warlikowski provide such opportunities to young people.

This year’s competition of the Interpretations will be an opportunity to see directors’ plays made under the auspices of TR Warszawa and Nowy Teatr in Warsaw. This is unlikely to result in the generational shift change; after all, there is no reason for Grzegrz Jarzyna and Krzysztof Warlikowski to give way to others. What is more important is the dialogue that is taking place between those who have shaped Polish theatre in the past 20 years and those who are just coming to impact it.