Dance and senses. An essay by Jacek Łumiński 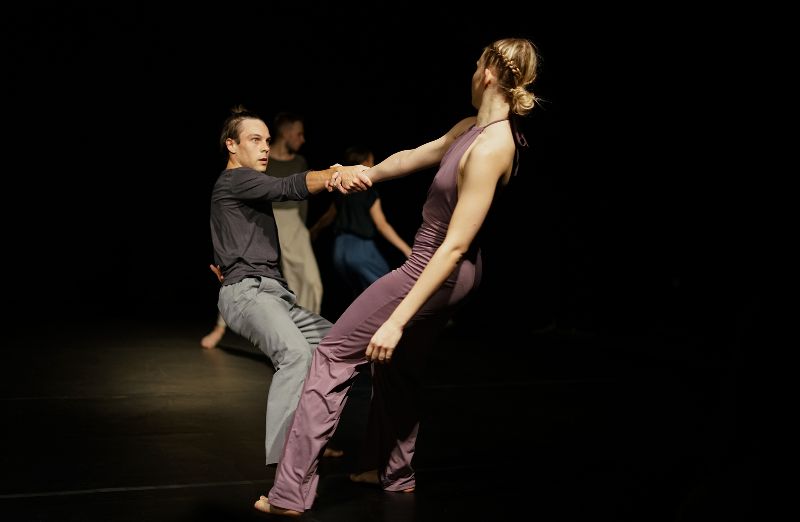 “If you want to know the secrets of the universe, think in terms of energy, frequency and vibration” – Nikola Tesla

Dance is more than the artistry of life – it embodies life. What bears witness to this are the social history of tango, the ethnography of the institution of transnational ballet, ritual healing dances in Cuba and Haiti, the artistry of the Mexico healer’s dance, traditional dances in Ghana as well as dances performed for tourists in Bali, Mexico, Panama and Canada.

Dance captures important dimensions of social life that cannot be easily expressed in words, emanating directly from the body, an instrument of perception and the domain of the senses, empathy and intuition. Dance is thus a sensory experience, and its value for the spectator depends on the overall power of the message, as effective as the spectator’s perceptual abilities and the integrity of the dance performance. At last, for the art philosopher Susanne Langer, dance is a phenomenon dominated by virtual powers.

The 20th century abounded in revolutionary events of a political and freedom-oriented nature, with profound transformations occurring simultaneously in technology, communication, social relations, as well as people’s awareness and needs. The 20th century saw radical changes in almost every realm of life and made the field of dance dynamically thrive. A real explosion of styles, types and forms of dance took place in artistic and social lives. Street dance emerged, and so did modern dance, dance theatre and ScreenDance, each specifically stressing the expressive abilities of the individual.

The dances of other cultures, while growing increasingly available, continued to be extravagant, sophisticated and even enticingly exotic and peculiar to us. Revolutionizing the culture of the Eurocentric world, social and political movements of the 20th century were visible in every kind of dance, with ballroom dance, street dance and its various styles (locking, hip-hop, popping, house, breaking, including B-Boying and breakdancing) all being rapidly transformed on the wave of subsequent musical revolutions.

Through gruelling physical exercise, the right choice of dance techniques, a healthy lifestyle and other methods, dance communities have developed a high level of artistic excellence on the one hand, and built strong titanic bodies on the other, turning dance into an extreme sport. In this article, I will attempt to discuss the main body of theoretical and embodied knowledge that has underpinned the dynamic development of dance forms in the 20th and 21st centuries.

For more than a century now, dance artists have created a vast range of dance types and styles through constant innovation and experimentation; these have made up several intersecting categories, including contemporary dance, postmodern dance, ballet and dance theatre. The recognition of dance as an art discipline and the acceptance of new ways of thinking about choreography have been an important part of that huge evolution and diversity.

At the heart of those transformations were several events: 1) Democratic and freedom movements; 2) Social change, personal freedom, freedom of speech and expression; 3) The development of social sciences, especially cultural anthropology and the anthropology of the senses. All these facts are of great importance for how one perceives and analyzes reality and for the development of art, with the latter being particularly noteworthy to me. The recent shift of scholarly interest towards the body, endurance, creativity and performance has raised the profile of dance as an important element of academic cultural research and has offered new channels for dialogue with other disciplines of social sciences.

The anthropological interest in the senses comes with references to Maurice Merlau-Ponty’s phenomenology and contemporary theories of political philosophies, which organize and define the characteristic features of the senses according to their historical function and circumstances. Charles Marx believed that the senses themselves had developed in dialectical relationships with individual members of society, and “the forming of the five senses is a labor of the entire history of the world down to the present.”

Another theorist Walter Benjamin wrote that: ”During long periods of history, the mode of human sense perception changes with humanity’s entire mode of existence. The manner in which human sense perception is organized, the medium in which it is accomplished, is determined not only by nature but by historical circumstances as well.” The historical and cultural aspects of sensory experience are also addressed by Constance Classen (1997) in her anthropological work on the ‘sensory model’.

A human-made artwork embodied by others, dance arranges multiple and polyphonic layers of meaning. A choreographer of an artistic piece or a ritual may have one message to convey, the performers may interpret it in their own way, and the audience, in another. This trait compounds the difficulties faced by scholars seeking to understand how and why dance has such a significant position in society. Dance may be watched for its formal aspects, meanings or content, or for the relationship it has with the wider social context, with the latter prevailing in the history of American anthropology, which has to do with the implicit hierarchy of domains within ethnographic research, art being relegated as the least important one to understand the society.

Even within the arts themselves, visual arts have always been favoured, perhaps because they are easier to document than the performing arts and their ephemeral ‘products’. Unlike in other cultures, in the Eurocentric culture the sense of sight is probably the most important one, and so visual arts enjoy a privileged position against other fields of art. Dance can make the process of observing, recording and analyzing difficult. The focus on who participates in dance and how it functions in society have made dance seem to belong to a different social category.

Meanwhile, dance provides people with compelling multi-sensory experiences. The intricate and sophisticated network of dynamic qualities of movement, rhythm, music, a specific kind of energy involves the simultaneous use of the right and left hemispheres of the brain in a complex creative process of self-expression. Since humans are complex beings, non-standard thinking is essential to learning the intricacies of the mechanisms driving their functioning. Everything is energy, frequency and vibration.

Michael Levy’s body and mind reflect the universe. By observing ourselves outside of thinking, we find answers to all questions. We enter the field of pure potential, where feelings and sensations expand into an infinite realm beyond mere words.