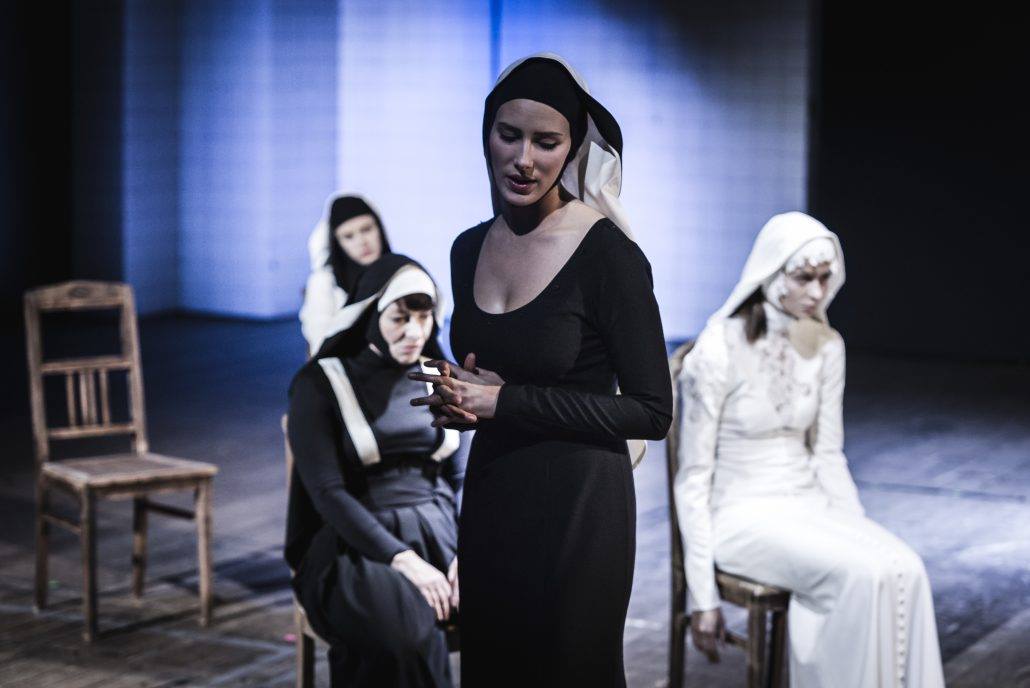 he stories of the heroines of Marta Abramowicz’s reportage “Zakonnice odchodzą po cichu” are the starting point of the performance.

They bridge the gap between observing actresses’ performance and their personal attitudes to the characters they interpret. ‘The central theme of the play is the sense of call, conceived both in the context of the sacred and the profane, as the service to God as well as actor’s mission and ethos.

During the performance, the audience will witness the emergence of an emotional bond between women who are initially strangers, namely the actress and the character she interprets. The performance addresses questions about the essence of identity, metaphysics and the widely conceived humanism. Theatre is an ideal place for the analysis of a topic that combines reality with fiction, spirituality with secularity, and performance with a reportage.

The play was produced as part of the 1st edition of the Modelatornia competition held at the JK Opole Theatre.

“The play is not a feminist manifesto. It shows how women become more open these days and do not let men reduce them to the role of slaves without rights, their own money, eating differently or worse than the local vicar. However, what they regret the most is the loss of the right to love. One of the heroines discovers that she may love God by having a family, another – by being in a relationship with a woman; another one wants to educate herself to help others in a better way. They do not have these opportunities at the monastery as a human does not matter there; blind obedience does. Presently, also in Poland, we are witnessing a debate on the role of the Catholic church in our life. The contribution to this debate that comes with the play from the JK Opole Theatre shows that women also want to have their say in the community of devout Catholics. They are no longer afraid to speak out, although so far they have left the monastery in silence. With performances like this one, this silence will not last long.

“I sit down and count microphone stands around. Seven of them. I count again. Nine. I look to the right and my sight touches the shimmering surface of an elegant black piano. The space is otherwise empty. Empty, but it is not neutral […]. Oh, at first, I didn’t notice the four ordinary wooden chairs at the back. Something is lying on them. Something like clothes. I guess these are monastic habits. After all, the “Nuns Leave in Silence” – as tells us the title of the play and the book by Marta Abramowicz […]. There is not a single man in the cast. And this is not just about the cast. The abundant choreographies for the play have been created by Aneta Jankowska. Patrycja Fitzet dressed the heroines in beautiful and original habits looking as if the freshly minted servants of God were going to take part in a Vatican Fashion Week of sorts. Natalia Czekała plays piano.”

“The actors perfectly fit in their roles. Cecylia Caban uses simple means to create a special bond with the audience. The JK Opole theatre features guest appearances by: Natalia Czekała, Joanna Sokołowska and Małgorzata Mikołajczyk. While Sokołowska and Mikołajczyk faithfully rendered their characters (respectively – their innocence and emotionality, and neurosis), Natalia Czekała impressed the audience with live music, including the melodic quote from the famous ballad “Na Wojtusia z popielnika,” which, accompanied by the silently and hardly accented lyrics, completely changes the character of the piece). The music is based mainly on simple rhythms and poignant melodies, but thanks to talented actors and pianists, it makes the clear strength of the show.”