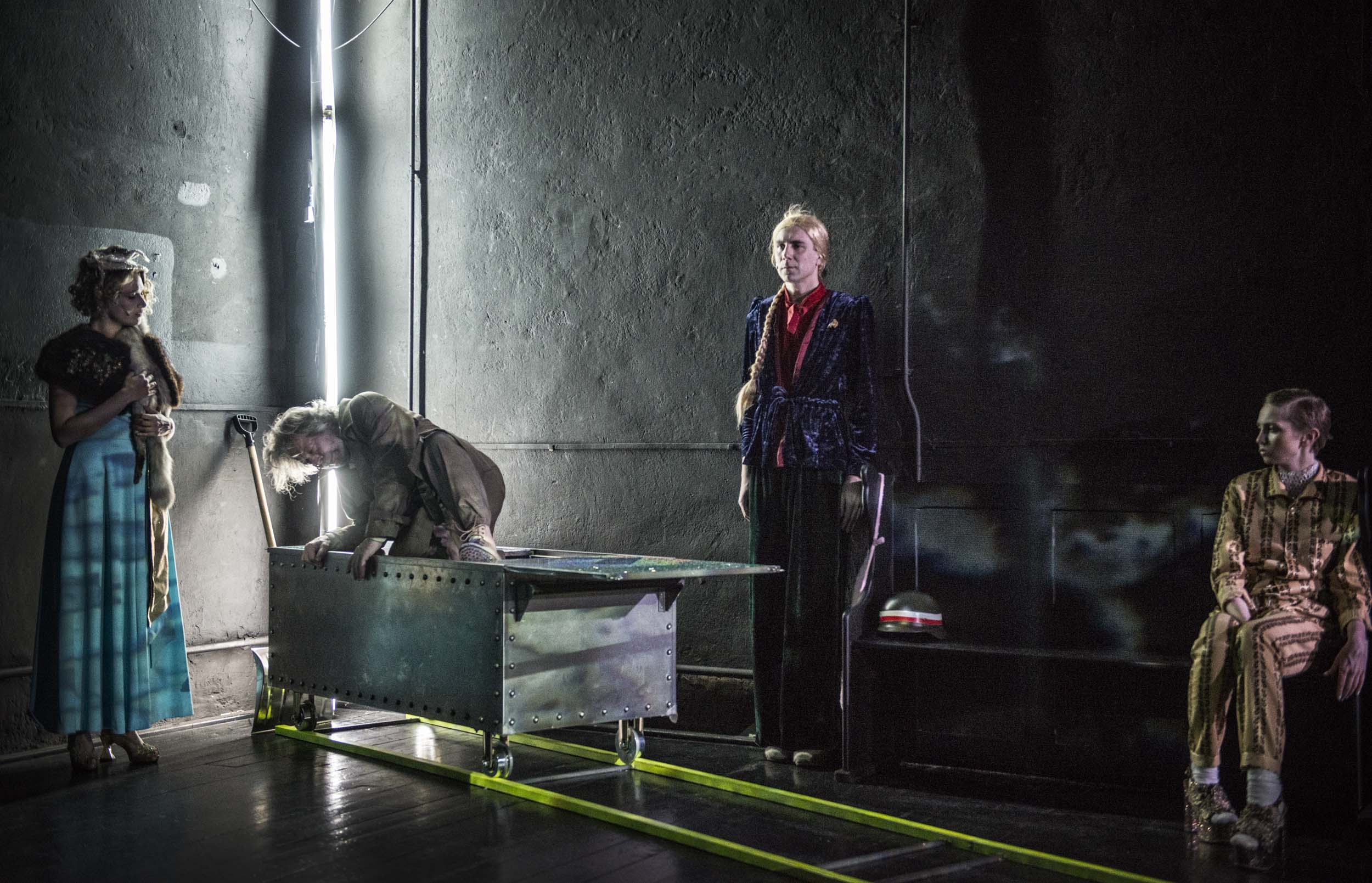 They would be referred to as “traitors to the country”, “collaborators”, and “renegades.” They had intimate relationships with German soldiers during the occupation. Actors, singers and the stars of cinema and cabaret. Did they really deserve the infamy and punishment inflicted on them by the underground? What were their motivations? Do we have the moral right to judge them today?

In their production, the playwright Magda Fertacz and director Jędrzej Piaskowski explore treason and collaboration from the perspective of individual memory. The script is partly based on the life of Maria Malicka, a famous pre-war Warsaw actress for whom a theatre was built at ul. Marszałkowska 8. Accused of collaboration with the Germans at the time of occupation, the artist was banned from performing in Warsaw after the war.

Another inspiration for the play is Arletta, or Leonie Bathiat, a famous French film and theatre actress of the 1930s and 1940s, who had had wartime liaisons with German officers and had been imprisoned before relaunching her national career, as well as the story of Deutsches Filmtheater operating during the German occupation of Poland in the building of Teatr Rozmaitości, and Mon Café, the establishment at Aleje Jerozolimskie before and during WWII frequented by Warsaw’s homosexuals.

By constructing a theatrical fantasy about wartime, the artists are asking questions about stigmatisation, punishment and judgment of individuals who, for a variety of reasons, renounce heroism and refuse to fight and make sacrifices for their country. How is historical memory and the moral judgment of past choices and actions constructed? What are the limits to interpreting and fantasising about the history that contains trauma and heroism? How can collective memory be healed?

“’Puppenhaus. Kuracja” by Jędrzej Piaskowski (…) is based on historical specifics yet it is also a repetition of each of the histories. The history qualified with epithets: the one of the WWII, and the history free from epithets. The war for heroism and the lack of it, the battle for the right to tell lies or to tell the truth, to be brave or hypocritical. Jędrzej Piaskowski tenderly, this is probably the best term, collects the stories about pre-war cases of ostracism, the war struggle between lust and reason, and the canny bitches at the solarium of Adolf H., showing them with no touch-up. This is why one watches the performance, the dance-show and the phantom-performance with increasing unrest […]. The most improtant moment of the performance? In the performance about the bitches of the WWII, the countesses of pleasure and the guzzlers of despair, the climax belongs to the Young Insurgent played by Lech Łotocki. The old, huge child, brave and distant, forgotten, anonymous and incorporeal. A boy man, a vampire man. A symbol of other romantic vampires. The insurgent has got lost within the historical stitch, got out of ruins and got onto an everlasting scaffolding. Within the interstice of history, he hits on a handsome boy played by Sebastian Pawlak. The boy is clad in a uniform; the boy has an SS-Mann’s glitter in his eye; this boy’s hands are trembling. Hasn’t he got sweaty? And the Łotocki’s Insurgent? He is seeking, manoeuvring, responding to himself or not. He sheds his gender lining and comes back to his place. He is serious and he is distanced. The Young Insurgent has got stuck in the great history – on the monuments, in the memories and the museums. But where is his heart, where are his genitals? He felt Poland within himself, because his urges were Poland, too. Poland is not just “Rota” and Maria Konopnicka; this is privacy, too. It is not just slogans and politics, but it is also the suction and forcing pump. Wyspiański would put it better.”

“The story of cursed love – drawing upon the biography of a pre-war film star Maria Malicka, accused of collaboration, and the drama by Djordje Lebovic “Lutka sa kreveta br. 21,” leaves a lump in your throat. It is primarily thanks to the witty text form Fertacz and the outstanding actors. Playing a camp guard, Justyna Wasilewska seeks to cleanse the memory of her heroine, who had survived Auschwitz because she had been a prostitute. The play also features Sebastian Pawlak in the role of Hanka, a Polish girl who could not forsake her love for a German airman. “Let’s flee this history,” the words of the Young Insurgent (outstanding Lech Łotocki), a prospective martyr, tragically in love with a handsome German soldier, reverberate like a horrifying refrain. However, as the artists show us, there is no way to escape this weird nightmare. The best actor is Agnieszka Żulewska, who plays the cursed film goddess. Ironic and authoritarian when she invites us to master workshops on playing martyrdom. Poignant as a bitter elderly lady on a wheelchair, she tells bored young provincial folks what war is and why nobody has the right to judge her.”

“’Puppenhaus’ might be viewed as a show about sexual collaboration at the time of war. In Poland, this phenomenon is extremely tabooed, and the details not conducive to clear judgements have been razed to the ground with the road roller of history. As part of a group of artists, Piaskowski and Fertacz expose the actions aimed at affecting our knowledge and memory for the sake of keeping the narratives correct. They turn memory and the concept of truth inside out in order to expose the relativism that is incorporated into them. One can also think of “Puppenhaus” as a play that dissects the myth of collaboration, including collaboration that the current government tries to track down by digging through the “folders.” It can also be thought of as a play about love. Or a play about healing trauma and terror within collective memory that come with poster heroism.”